FPV Drones are operated quite different to many other types of drones, including photography models, toy drones, and fishing drones for example. We’ve compiled our most asked questions into a quick and easy list for you to read.

What is the difference between FPV and DJI drones?

FPV or First Person View drones are primarily operated using a headset which relays the video feed from the camera on the drone in ultra-low latency. This allows you to perform acrobatic and fast-paced manoeuvres.

FPV drones also do not have any speed limits or sensors, which means they will go as fast as they can when given sufficient throttle.

Do I need to use my cellphone in FPV Goggles?

No, all FPV headsets include built in displays and electronics which do not require third-party devices such as a phone. This is due to the millisecond latency required to operate an FPV Drone with precision.

How fast can an FPV Racing Drone fly?

Racing drones can range anywhere between 60kph – 180kph+!
This is largely dependant on the size of the drone and the motors attached to it. In the right conditions, most FPV Racing Drones can reach over 80kph relatively easily.

Unless the drone has a dedicated onboard DVR (Digital Video Recorder) the answer is usually no. Often pilots will either record footage on their FPV Goggles or attach a GoPro to their drone to capture HD footage. If your drone has a DJI Air Unit built in (for DJI FPV), it can record on to a Micro SD card.

Famous FPV pilots such as Johnny FPV make it look easy to manoeuvre a racing drone at such high speeds! Keep in mind it takes years of practice and regular flying to become a master of your drone. Flying a racing drone is a much different experience to using a photography-based drone, where many aspects of flying are automatically controlled by the onboard computer. Racing drones are much less forgiving than their cinematic counterparts when it comes to stick input.

What’s the best complete Drone Starter Kit for a beginner?

We highly recommend you start with a RTF (Ready to fly) kit such as the EMAX TinyHawk 3 RTF package. It includes everything you need to get started in the world of FPV Racing Drones.

What is the TBS Crossfire?

TBS (Team Black Sheep) Crossfire is a technology developed by US Company TBS which allows for long-distance RC link with unique features such as the ability to two-way heal an RC link. This ensures your model will stay linked to the controller even behind obstacles which would typically lose connection such as clouds, mountains and buildings. The TBS Crossfire requires a module attached to your Transmitter and a receiver device connected to your FPV Drone.

5.8GHz (Gigahertz) is the frequency in which FPV drones operate their video transmissions. Within the 5.8GHz spectrum lay 48 different individual frequencies which can be used by the onboard Video Transmitter (VTX) to transmit a video signal to your FPV Goggles. Almost every FPV Headset that supports 5.8GHz can receive these 48 channels which means there is usually never a conflict in compatbility across headset brands.

Can more than one person view a FPV Drone Video feed?

Yes, anyone within range of an FPV Drone can view the transmitted video on their own FPV Goggles or 5.8GHz devices in realtime. This means there is no limit to how many people can tune in to a pilots feed at any time.

Can anyone fly an FPV Drone?

Anyone that is dedicated to learn the basic controls of a racing drone can fly one safely. There are assistant modes in Betaflight which allow beginners to get a taste of flying while practising basic manoeuvres

What is the range on FPV Drones?

The range of your FPV drone entirely depends on the Radio controller you’re using and the receiver. Most Radios operate on the 2.4GHz spectrum which top out at about 1km. You can extend this range by using a module such as the TBS Crossfire or TBS Tracer.

The EMAX E8 transmitter uses the D8 protocol and has a range of up to 400m.

What is DJI FPV and Digital FPV?

DJI developed their own HD FPV system by using a digital video link. This sytem allows pilots to experience true HD FPV in an ultra-low latency like never before. The system only works with DJI and Caddx Air Units which go inside the drone, and are linked up to the DJI FPV Goggles.

What batteries are used in FPV Drones?

FPV drones use LiPo (Lithium Polymer) batteries for their high discharge rating. This allows for maximum performance and speed when flying. Most FPV drones can use a range of batteries, which are measured in voltage and capacity. They are usually connected using an XT60 or XT30 plug.

How long can FPV drones fly for?

Most FPV drones have a flight time of 4-6 minutes. This is due to the high performance that they are able to provide, compared with photography drones. When flown stable and slowly, FPV drones can also experience much longer flight times of up to 15 minutes.

What are FPV drones used for?

FPV drones can be used for just about anything. Many drone pilots use them for recreation, as they allow you to experience the freedom of flight without and speed restrictions and sensors. Some FPV drones are catered towards flying indoors (known as Whoops) and others for outdoor close proximity flying (known as CineWhoops).

What is the normal size for an FPV Drone?

Most FPV drones have their sizes measured by the propellers used on them. The most common size is a 5-inch drone, which uses 5″, 3-blade propellers. Other common FPV drones use 7-inch, 3-inch and other propeller sizes.

How can FPV drones be customised?

Any FPV drone can be customised by changing out the components such as the motors, camera, electronics to upgrade or repair. Our drones can also be customised in the software by using the open source software, betaflight.

Betaflight is the open-source software that powers almost 90% of FPV drones currently. It comes preinstalled on many Flight Controllers and can be easily configured using the Betaflight Configurator software. 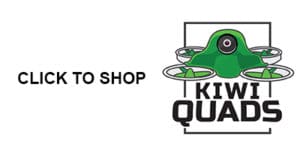